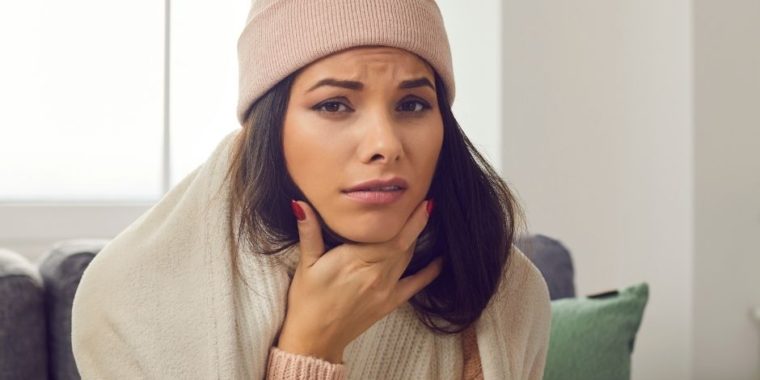 Knowing about the diseases that may befall you or your loved ones is very important. By knowing the symptoms, you can easily find out what you are dealing with and know right away whether it makes sense to try home treatment or go to the doctor. Today, we’re going to look at laryngitis together.

Laryngitis, or laryngitis (Latin: larynx), is a collective term for disease of the larynx on an inflammatory basis. Laryngitis has several forms that are caused by different influences. The most common causative agents are viruses and bacteria.

To better understand the severity of the disease, let’s look at where the larynx is located and what functions it performs. The larynx could be likened to a kind of tube reinforced with cartilage. It carries air through it to the trachea and then to the lungs. The entrance to the larynx is protected by a laryngeal flap, which prevents inhalation of food.

In addition to breathing, coughing, and swallowing, voice production is a very important function of the larynx. The muscles of the vocal cords tighten and contract, changing the airflow. However, the vocal cords are not the origin of the voice colour, which is produced only by echoes in the upper respiratory tract and nasal cavities.

In the first stages of laryngitis we encounter non-specific symptoms:

Three days after the onset of the first symptoms, there are specific symptoms associated with involvement in the vocal cord area:

Chronic laryngitis arises due to prolonged inflammatory processes in various parts of the airways or prolonged overloading of the vocal cords (singers, speakers, teachers).Chronic inflammation can also arise from chemical damage due to smoking, living in dusty environments or after contact with chemicals.

The symptoms of chronic laryngitis develop over a prolonged period of time and are not very pronounced. They are rather bothersome to the patient but do not limit him/her in any way, which is why it often remains untreated.

There is no specific treatment for laryngitis. The approach is to relieve the symptoms with cough suppressants and in the next phase of treatment is to dissolve the mucus and promote its expectoration. Antibiotics are prescribed only when the disease is proven to be caused by bacteria.

The patient observes bed rest and must spare his or her vocal cords. Thus, he or she should drink lukewarm fluids, not talk too much, and avoid dusty environments, especially smoking.

The airways of children and infants are narrower than those of adults, which makes them more at risk for the disease. The course of the disease varies in children, but symptoms usually appear at night, when a dramatic barking cough occurs that can irritate the child to the point of vomiting.

The cough is also accompanied by wheezing on inhalation, grunting, marked shortness of breath and restlessness in the child. If laryngeal constriction is significant, the peripheral parts of the body (tip of the nose, fingers, pinnae) may become blue. In severe cases, the airway is closed completely and the child suffocates. Blueing and marked respiratory distress is a clear indication to call the emergency services.

The first aid in children is to remove the swelling in the throat, which you can do by inhaling cold air (open a window in winter, breathe air from the freezer) or by applying a cold compress to the throat. Although the attack will subside after a while, it is likely to reappear the next night.

The epiglottis, or laryngeal flange, is located behind the root of the tongue and closes the entrance to the trachea during swallowing to prevent the inhalation of food. Inflammation of the laryngeal flange occurs most commonly in children between the ages of 3 and 6 as a complication of laryngitis or tonsillitis.

Laryngitis is a life-threatening condition in which the laryngeal flange swells and enlarges several times, resulting in complete airway closure and asphyxiation.

The onset of symptoms is rapid and there are other symptoms compared to laryngitis:

Disease development is rapid and early intervention by a physician is important. If laryngitis is suspected, call the emergency services immediately.